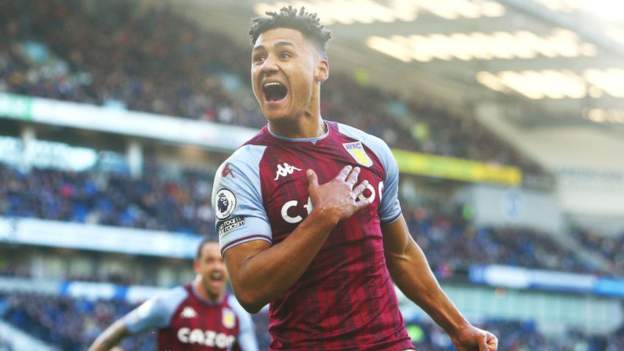 Ollie Watkins scored his first goal since December as Aston Villa kept themselves in contention for a top-10 finish in the Premier League by winning at Brighton & Hove Albion.

Matty Cash opened the scoring for the visitors in the first half, driving in from the edge of the box after Lucas Digne’s cross had been half-cleared.

Brighton had been the better side until then but was unable to capitalise on some poor Aston Villa defending.

The away side had a great chance to increase their lead soon after the restart but Philippe Coutinho’s free-kick was superbly kept out by a diving Robert Sanchez.

But a second arrived towards the end of the second half when Watkins ran clear after Tyrone Mings sent a superb ball over the top and the striker finished confidently for his sixth Premier League goal of the season.

Substitute Danny Welbeck headed wide when unmarked late on but the hosts never really looked like staging a dramatic fightback.

Steven Gerrard could hardly have wished for a better start to life as a Premier League manager after overseeing four wins in his first six games following his appointment as Aston Villa boss on 13 November.

That had Villa fans dreaming of the possibility of securing European football for next season but a run of four defeats in their next seven games saw their challenge for the top seven fades away.

This was not quite a perfect performance, with a nervous Villa fortunate not to be punished in the early stages for a lack of concentration in defence but they improved after Cash’s opener and Watkins’ first goal of 2022 will no doubt do wonders to the striker’s confidence.

After back-to-back defeats, it was a win that Villa will hope gets their season back on track but for Brighton, it was another disappointing outcome on home soil.

The Seagulls have impressed many with their brand of football, but too often good performances have not been backed up with results.

It is now just one victory in their last 10 games at home and finding ways to win more often in front of their own fans is something they need to resolve if they are to establish themselves in the top half of the table.