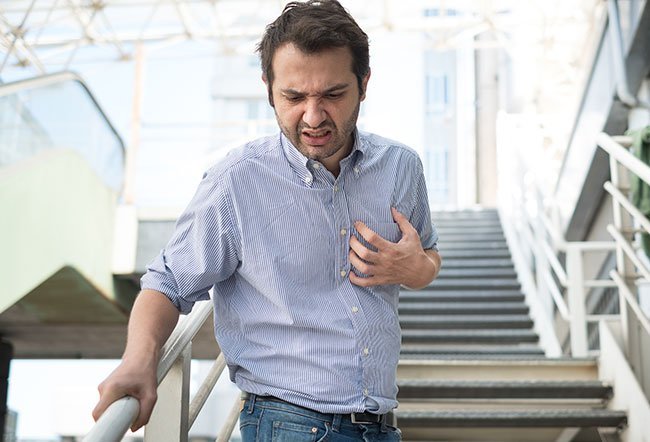 Our heart is one of the toughest organs of our body. Its main function is to pump oxygenated blood throughout the body. A cardiac arrest occurs when the heart stops functioning unexpectedly.

It generally results from an electrical disturbance in the heart, which causes irregular heartbeats. This hampers the pumping action of the heart, stopping the blood flow through the body. A person can lose consciousness and die within minutes if immediate treatment is not given.

What are the symptoms of cardiac arrest?
Cardiac arrest is a sudden and severe condition. It can cause:

Sudden collapse
Loss of consciousness
Loss of breathing
No heartbeat
Even though cardiac arrest is an unexpected condition, you may experience certain symptoms moments before a complete arrest. The early symptoms are as follows:

What are its causes?
Most of the cardiac arrests happen when the electrical system od a diseased heart malfunctions. Such malfunction may cause an abnormal heart rhythm like ventricular fibrillation or ventricular tachycardia. A few cardiac arrests can also be caused by extreme slowing of the heart’s rhythm (also called bradycardia).

Such irregular heartbeats which can cause cardiac arrest, are considered life-threatening arrhythmias.

Other causes of cardiac arrest include:

Age: With increasing age, the risk of a cardiac arrest increases.
Family history: If anyone in your family has had a history of heart problems, you are at a greater risk.
Stress: Stress is a major culprit. It is linked to a number of diseases, including cardiac arrests.
Electrolyte disturbance( electrolytes such as potassium,calcium,magnesium etc)
What are the treatment options available?
The available treatment options include immediate treatment and long term treatment.

Immediate treatment
CPR: Cardiopulmonary resuscitation (CPR) is needed for treating sudden cardiac arrest immediately.
Defibrillation: A device is programmed to send an electrical shock to the heart when it detects ventricular defibrillation. This stops the heart momentarily and causes it to go back to its normal rhythm.

Here are 5 things you shouldn’t trade for love