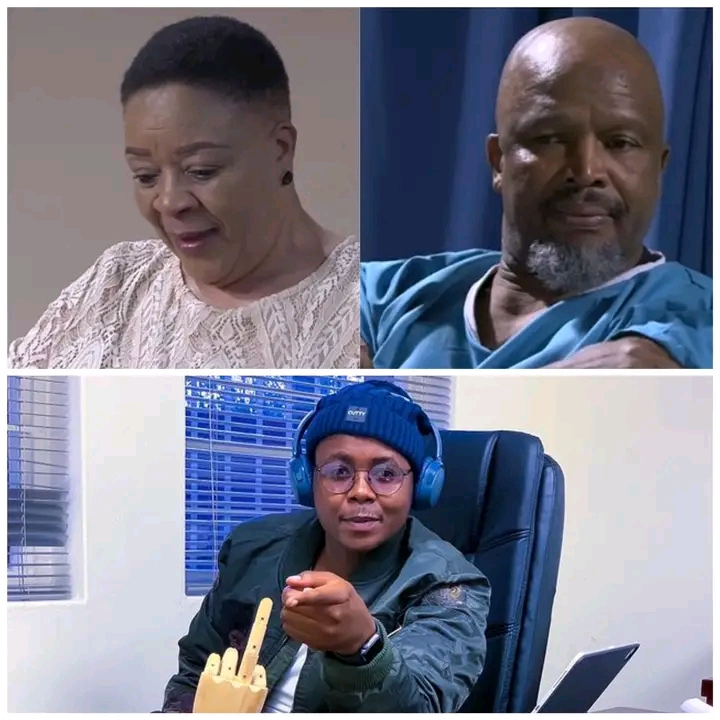 Cornet Mamabolo’s return as Tbose to ‘Skeem Saam’ as a spoiler to save Jacobeth who has just been scammed?
Cornet Mamabolo, who left The River as Lerumo, is returning to Skeem Saam as Thabo “Tbose” Maputla.

‘SKEEM SAAM’: ‘PRODIGAL SON RETURNS’
Cornet Mamabolo, who portrayed Lerumo in The River as The Skeem Saam, told Sunday World that he felt blessed to have brought the character to life.

“I knew I had to fall in love with Lerumo in order for the audience to genuinely dislike him. It is one of those roles for which, if the audience truly adores you, it indicates that you performed poorly as an actor. It is a role that is thrilling for an actor but repulsive for the audience,’ he wrote.

The actor and businessman added that he was also appreciative of the production company and the directors who assisted him in making decisions for the role.He also thanked the actors from the telenovela The River for making it simple for him to comprehend the show’s world.

The TVSA January teasers reveal that a prodigal son will return home on January 3, but do not specify whether it is Mamabolo or his on-screen brother Eric Macheru, who portrays Leeto Maputla.“A prodigal son reconciles with his parents after returning home”

It is not yet very clear at this moment what this periodical son’s mission really is but if we just want to be honest between you and me, honestly his return has something to do with Principal Jacobeth who has just been scammed by his, thought-to-be soulmate.Well, before jumping the gun lets wait and see how it will go down!

Pretty is becoming increasingly irritated by her relationship with Lehasa. The pressure on Koloi to find employment increases. Meikie feels let down by Ntswaki.

A prodigal son reconciles with his parents after returning home. Khwezikazi discovers she is harboring a snake. Two adolescents recognize that their actions have dire consequences.

Lehasa has a plan in place to kill Khwezikazi. Ramolao increases the pressure on Koloi concerning his unemployment. The Maputlas receive unanticipated relatives.

Lehasa is thrown into a complete tailspin when Khwezikazi and the baby are placed in danger. When he secures an interview in the city of bright lights, Koloi’s fortunes turn for the better. Meikie is somewhat offended by the rumors circulating about Ntswaki and her deviant behavior.

Chef Kgosi bombards Pretty with bitter truths and shatters her love fantasy. At the worst possible moment for Koloi, Eunice demands what is rightfully hers. Meikie discovers why Ntswaki has been hiding her grade 9 report. At Level, Francois faces a staffing crisis.

Lehasa issues a warning to Kgosi that suggests he meet with his Creator. Meikie has a conversation with Ntswaki, who lies once more. Francois delivers a stern lecture to his employees about their performance.

Zakhele pays a surprise visit to Khwezikazi and receives the shock of his life. Koloi’s first day in Johannesburg is a living nightmare. Meikie is incensed by Alfred’s behavior.

Pretty is over her boyfriend, and there is no turning back. Meikie makes a promise regarding Ntswaki’s future to Ntswaki. The City of Gold completely transforms Koloi’s life.

Lehasa is thrown from the frying pan into the fire due to unanticipated guests. Alfred rejects Meikie once more. When Shivambu discovers that his child has gone missing miles away, he loses it.

Pretty, emotionally exhausted, draws the line with Lehasa. Ramolao and Shivambu initiate their search for Koloi in Johannesburg. Meikie and Ntswaki are exhausted as a result of their high school rejections.

The Seakamelas are astonished to discover an unexpected guest at their front door. Ntswaki seizes control of the situation, leaving the Maputlas concerned about her whereabouts. Koloi has a difficult existence on the streets of Joburg.

Lehasa behaves in an unexpected manner. Koloi evades a Sergeant’s grasping hands. Uncle Meikie arrives at the Maputlas intending to take a mischievous adolescent back home.

Kgosi urges Khwezi to up her game after hearing Lehasa’s news. It is the worst day of Letetswe’s life as he faces a new reality. Ruth is disturbed by her boyfriend’s new living arrangements.

Lehasa is duped by Khwezikazi and Chef Kgosi’s web of deceit. The truth is revealed, and Letetswe must face the music from Kunutu. Koloi finally meets the Homeless Guy with whom he has been surviving.

Lehasa and Khwezikazi are given bad news about their child. Koloi calls the company he was scheduled to interview with and is devastated by their response. Letetswe makes a humble request to Alfred regarding his grade, but is unsuccessful.

Koloi arrives at Level Café to a beautiful coincidence. Letetswe defeats Pax without exertion in the competition for the title of “IT Girl.”

Also Read Here is Ayanda Ncwane’s net worth in 2022

Kgosi’s spine shivers in response to Lehasa’s admonition. A new dishwasher is delivered to Petersen’s workplace. Letetswe is on Charles’s naughty list.

Chef Kgosi’s mind goes into overdrive when he discovers unsettling information about Lehasa. Koloi is determined to turn a new leaf in the City of Gold, but not everything is peachy keen. Blood and water are the options presented to Mahlatse.

Khwezikazi and Chef Kgosi are apprehended in the act of taking off. Pax confronts Mahlatse regarding the “new” ally he has. Koloi communicates with Shivambu and reveals his inner self.

A desperate woman attempting to flee is caught in the act. Ruth is devastated to learn that Koloi is safe and employed in Johannesburg, but he failed to inform her. Charles and Mr. Kgomo compete on behalf of their sons, their most prized possessions.

Khwezikazi makes an attempt to save her own life. Melita’s antics at the hospital irritate the Human Resources Manager. Koloi impresses at Level Café.

Francois’ worst nightmare is realized when someone he has been avoiding visits him. Koloi’s luck looks like it’s finally turning. Melita irritates the Human Resources Manager and Dr. Hlongwane.