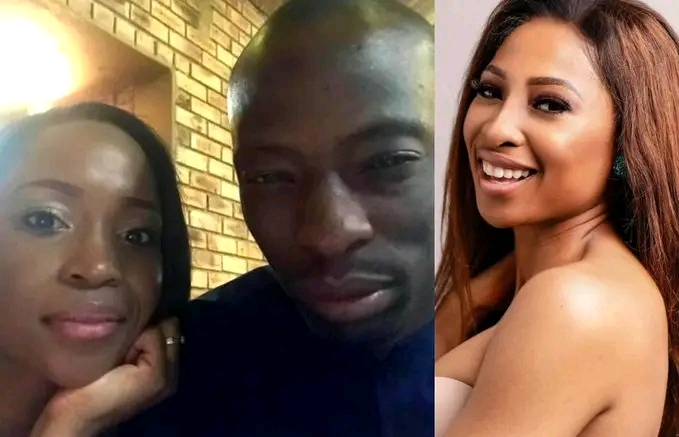 Enhle Mbali’s affair with married man exposed by the wife see all here.It does not rain but it pours for TV actress and businesswoman Enhle Mbali Mlotshwa, who is not catching a break as she has found herself trending again for the wrong reasons. The actress is accused of being a home wrecker.In a shocking accusation, Valentine Bango has taken to social media to expose her husband’s alleged cheating shenanigans. She claims Enhle Mbali had been having a secret affair with her husband Justice Huni, for a couple of years now.

She has revealed that her husband began cheating on her following Enhle’s messy breakup with her former husband DJ Black Coffee. She claims Enhle and her husband were friends before. When Enhle got into a relationship with Black Coffee they stopped talking, but a couple of years later following Enhle’s divorce saga with Black Coffee they started talking again.”12 years ago when my husband was broke you didn’t want him. You kept him in the friend zone. Then you found Black Coffee, got married, and never spoke to my husband since.”

According to Justice, the two decided to let the cat out of the bag because they wanted Enhle to join the marriage as a second wife. “They tried to make their affair look pretty unfortunate but you can’t turn dirt into gold. I rejected and dismissed the proposal. I have never and will never agree to polygamy. This might be the way of life for others but it is not what I want for my life,” she wrote.

Justice asked Enhle hard-hitting questions about allegedly wrecking her marriage while she fought for her marriage with Grammy award-winning DJ Black Coffee.”How is it okay for you to cry about Black Coffee cheating on you and then go and do the same to another woman?””How is it ok for you to cry about adultery breaking up your family and then turn around and do that to another family? You are a home wrecker.”

“If polygamy is your thing, why didn’t you ask Black Coffee to make his mistresses wives in your marriage and leave my marriage alone?””Adultery is a form of abuse. How can you advocate for women while sleeping with my husband? You and my husband’s actions have broken me.She says Enhle has always advocated for women’s empowerment, but she was having an affair with her husband.