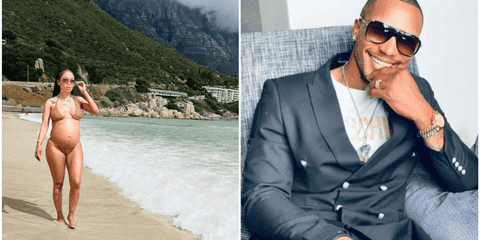 Here is everything you probably didn’t know about Kelly Khumalo’s new baby daddy.Kelly Khumalo shocked Mzansi when she revealed that she was pregnant with her 3rd born child. She shared pictures rocking in a golden jumpsuit, showing her lightly protruding belly that had fans concluding she was pregnant with baby number 3. However, the actress did not reveal her baby daddy leaving many to connect the dots on who the father is. Sources say that Kelly Khumalo’s new baby daddy is Mthokozisi Yende, as the two have been spotted together on several occasions.

The rumours of Mthokozisi Yende being Kelly Khumalo’s baby daddy are making rounds on social media, leaving Mzansi curious to know about Yende. Here is a look at Mthokozisi Yende’s profile background, sources of income, net worth and everything you need to know about him.Well, it looks like Kelly Khumalo is attracted to soccer players. His new baby daddy Mthokozisi is a retired football player famous for playing for Maritzburg United in the Premier Soccer League and Kaizer Chiefs.

Mthokozisi Yende started his professional football career at Benoni Premier United, where he was incredibly impressed. He later moved to Tembisa, producing outstanding performances that made him a fan favourite in his local club. It took Yende so many years to become a famous footballer in the first division. After heroic performances at Tembisa, Yende attracted interest from top-flight clubs like the University of Pretoria. He joined the University of Pretoria in 2006 and produced arguably his best football.

Also Read Pearl Thusi opens up on the death of her parents.

In the 2009 transfer window, Yende signed for the last season’s third-placed Kaizer Chiefs in the top flight for an undisclosed fee. Many fans called him names and said he was a lousy signing, but that did not stop the tenacious midfielder. During his first days, Yende failed to win his place in the first eleven. As the season continues, Yende gets his chance to impress, showing fans what he is all about.Instantly, Yende became a key player and became a fan favourite. He dictated the midfield, and he proved haters wrong, claiming to be a fine player he showed at the University of Pretoria. Shockingly, the Amakhosi sensation disappeared from football, and no one knew where their good midfielder had gone.

Kelly Khumalo’s new baby daddy Mthokozisi Yende’s 2022 net worth
Although he is no longer a soccer player, Yende has money-making deals, which makes him live an expensive lifestyle. Well, it’s no secret that Kelly Khumalo loves her man, young and rich that’s why Yende was able to attract her.Several sources say that Mthokozisi Yende is a prominent businessman specialising in the transport and logistics business. As of 2022, Mthokozisi Yende has a net worth of R92.6 million. His net worth has the potential to grow if his business deals boom.

The reasons why Yende left football were revealed after his interview with Robert Marawa. In the interview, Yende disclosed that he left football because he was dating his boss’s mistresses. Now the big question is, who is the boss that Yende is talking about? During his stay at Kaizer, Yende was coached by Vladimir Vermezović, Ace Khuse (interim) and Scotland Stuart Baxter. Among these three coaches is probably the one who had a mistress Yende dated.