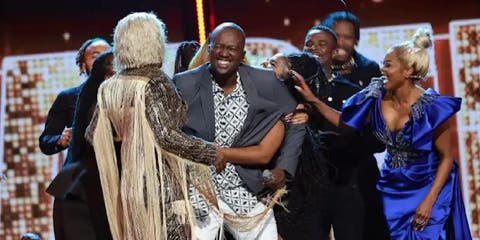 Idols SA season 18 winner Thapelo Molomo has left tongues wagging on social media after he was spotted selling eggs in the streets. People are wondering if he has already blown the millions that he won after he won the show last year.

In a viral video that is trending on Twitter, the idol’s winner could be seen selling eggs in the boot of his car on a dusty street. This has stirred a debate on social media as some see it as a side hustle whilst others are claiming that he is already broke. The singer is currently a psychologist at Brits police station in the northwest and also an upcoming musician.

The singer revealed that selling eggs is his side hustle as one should not depend on one source of income. He said that he wants to inspire the youth to create employment for themselves rather than sit at home waiting for job opportunities. He said”I’m not broke. I’m just trying to impact people’s lives. I invested the cash prize in a home for my family. I needed to get myself involved in a small project. Me selling eggs and achaar is the motivation for the youth and musicians to create employment for themselves instead of waiting for it.

“Creating employment for ourselves does not require you to think too big. With R500 you can buy a box of eggs, get profit and build from that,”

He further explained that time management is very important. During the week he is at work and after hours he will be busy selling eggs and achaar then on weekend he will be singing at gigs.

He emphasized that the youth should take on this initiative to create jobs for themselves. Do not be ashamed of your hustle do it with pride as long as it brings foto to the table.