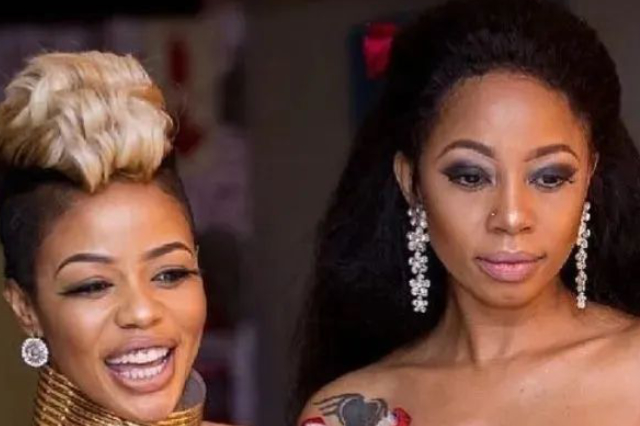 Their split was highly publicized after Kelly released a statement distancing herself from a scam Zandie’s husband Mhlo Gumede was allegedly involved in.Zandie hit back at the allegations and announced a “divorce” from her sister, in a lengthy Instagram post.Kelly first hinted at being ready to work things out with her sister when she sat down for her first therapy session on her show in July.

Also Read Pearl Thusi opens up on the death of her parents.

“I’m at a point where I’m tired of being mad. It doesn’t serve me any more and I think we should find an amicable way of dealing with each other … the biggest issue is I felt my mother wasn’t doing her part,” she told her therapist.

Kelly revealed that she and her sister have buried the hatchet and are a part of each other’s lives again.Talking to Sol Phenduka and Dineo Ranaka as a guest on Kaya 959 in late September , Kelly confirmed she and her sister were no longer at war.

“We are good. We are very good actually. I think we needed that bit of a break. You know, when you are so close to another to a point where you lose self-identity, which is a dangerous thing for an individual … so I now feel like we needed that. She had to find her outside me, and I had to find me outside her.”

“I didn’t know how to react. I think the thing that made me uneasy was the therapy part of things,. Whatever happens, we must have resolved everything by the time we left the room. It’s been a heavy load to carry all this time,” she said, explaining her intentions for going into therapy.The pair were even together at recent family gatherings which included Zandie’ son Zenala’s christening and their mother’s surprise birthday party.