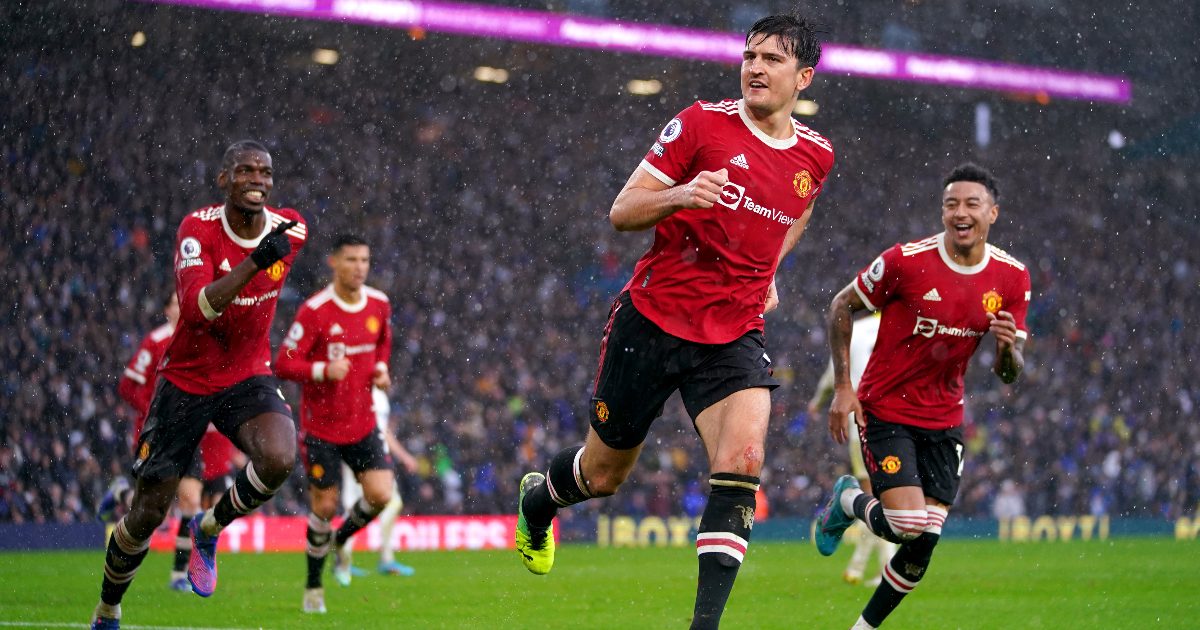 Manchester United survived a stirring Leeds United comeback at an emotional Elland Road to strengthen their position in the Premier League’s top four with a crucial victory.

In the first game in front of fans between the two old rivals at Elland Road since October 2003, they produced a fitting spectacle played out in a deluge and a predictably thunderous atmosphere.

Manchester United was in complete control at the break after captain Harry Maguire headed in Luke Shaw’s corner, and Bruno Fernandes did the same from Jadon Sancho’s cross right on half-time.

Leeds, however, mounted a superb revival and were level with two goals inside a minute as Rodrigo’s 53rd-minute cross drifted in behind keeper David de Gea, then substitute Raphinha sent Elland Road into raptures when he slid home a cross from Daniel James.

Manchester United gathered themselves, manager Ralf Rangnick made changes, and one of his substitutes produced the rewards as Fred drove in at Illan Meslier’s near post following more good work by Sancho with 20 minutes left – although Anthony Elanga was struck by objects thrown from the crowd amid the celebrations.

Manchester United’s victory came in three phases – the control of the first half, the shock of Leeds United’s quick one-two, then the recovery to finally close out the victory they deserved.

This was always going to be a test of mettle and for a spell after the break when Leeds scored those two quick goals and were winning all the 50-50s in this most raucous of environments, it looked like they would not come through the examination unscathed.

Manchester United’s players looked shell-shocked at the turn of events that allowed Leeds, who looked deflated at half-time, to revive themselves and even threaten a victory that would have been the sweetest of all for the home fans, who made their dislike of the visitors clear before, during and after this game.

Manager Rangnick, however, deserves credit for the changes that restored Manchester United’s equilibrium, Fred coming on to put them back in front and another substitute, Elanga, snuffing out any hope Leeds had of a point with the fourth.

Manchester United will feel they deserved the win over the whole piece, but they were fragile at times and were rocking under Leeds attacks until Fred silenced the crowd, albeit temporarily.

There were unsavoury scenes when Elanga needed to be attended to after being hit by missiles thrown from the crowd following Fred’s goal, but he was able to regain his composure to such an extent that he struck the final blow in the closing moments.

Manchester United enjoyed their second win in a week, moving back into the top four, but will know they need to keep winning with Arsenal four points behind in sixth with three games in hand.

Leeds United demonstrated every facet of exactly what they are in another Elland Road thrill ride.

Marcelo Bielsa’s side can be called many things but never dull.

Leeds showed their defensive frailty in the first half when Diego Llorente failed miserably to mark Maguire at a corner, the situation not helped by keeper Meslier’s ‘in-out’ hokey-cokey that left him in no man’s land.

They were exposed again when Victor Lindelof strode out of defence to tee up Sancho for the perfect cross on to Fernandes’ head to send clouds of gloom over Elland Road, to accompany those depositing constant heavy rain on a pitch left carrying surface water.

What we saw then was the bold, attacking bravery that has made Leeds, under Bielsa, one of the most exciting teams to watch since their return to the Premier League.

They pulled the situation around but there was never a sense that they were in complete control, secure against an attacking counterpunch and so it proved as Manchester United inflicted further punishment.

They are five points off the relegation places with a trip to Liverpool on the horizon this week, so it will not get any easier for Bielsa and his players.