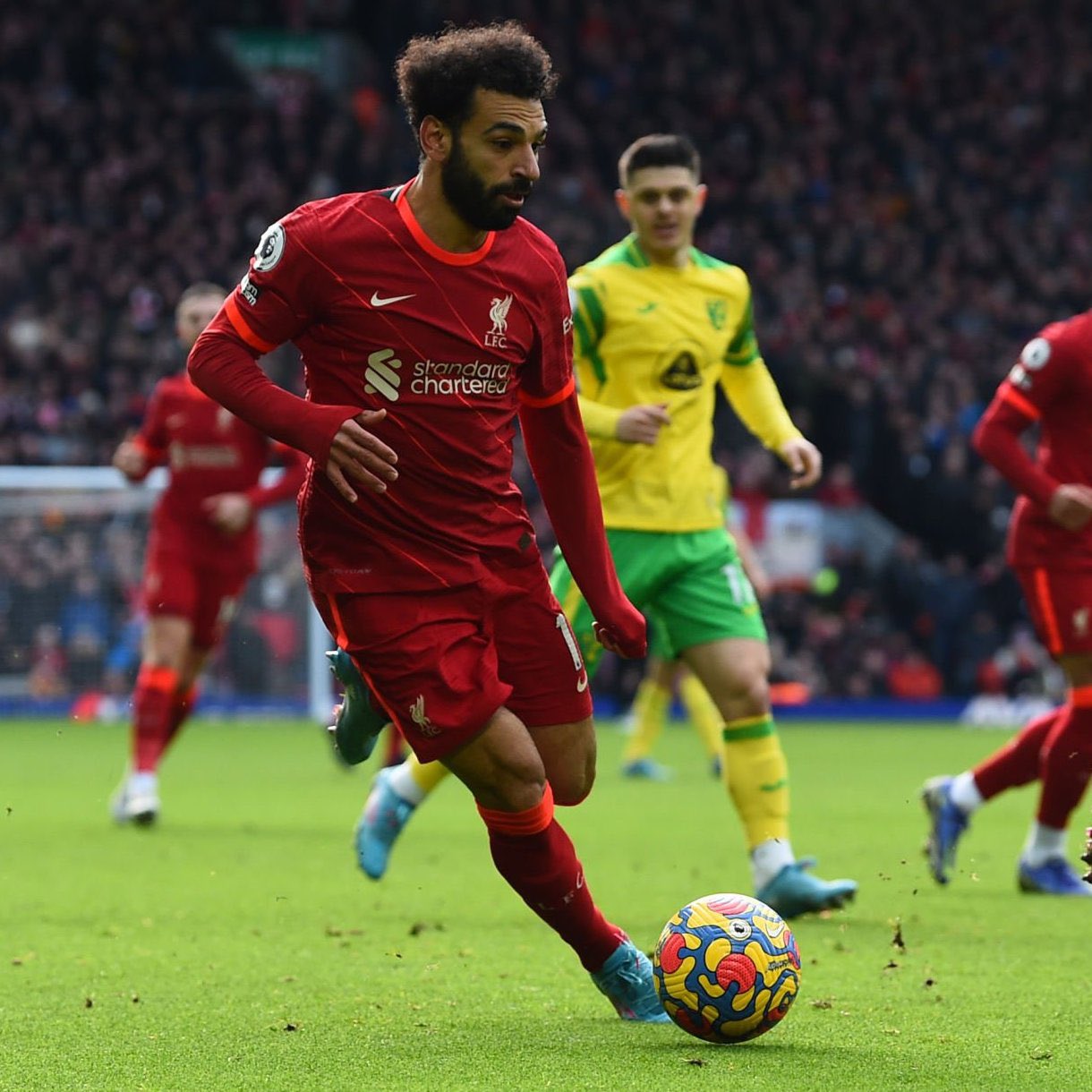 Liverpool staged a second-half comeback against a resilient Norwich side to keep their Premier League title hopes alive with an eighth successive win in all competitions.

The Reds had threatened the Norwich goal countless times but they were stunned into emergency action moments after the interval when Milot Rashica’s deflected strike gave the Canaries hope of a first win at Anfield in 28 years.

Liverpool boss Jurgen Klopp, who made seven changes to the side that won at Inter Milan in the Champions League in midweek, intervened to make attacking changes on 62 minutes and within four minutes his side had turned the game around.

Sadio Mane acrobatically turned home Konstantinos Tsimikas’ header and Mohamed Salah raced on to a clearance from goalkeeper Alisson Becker to round Angus Gunn and score.

Salah’s 17th league goal of the campaign was his 150th in all competitions for Liverpool – making him one of only 10 men to reach that figure for the club – and Luis Diaz added his first since joining from Porto with a neat, chipped finish to seal the win.

Klopp’s side moves to within six points of league leaders Manchester City before the champions’ late game, while Norwich drop to bottom place and are five points from safety.

While the stats will show a Liverpool win built from 29 shots and 70% of possession, Norwich can feel slightly hard done after showing great character for over an hour.

Their 4-3-3 system slickly dropped into a 4-5-1 out of possession and Dean Smith’s side looked to play out from the back, despite the threat of a Liverpool press that managed to win the ball back six times in the final third in the first 45 minutes.

An entertaining opening saw Teemu Pukki miss when one-on-one with Alisson, while Virgil van Dijk went close for the home side, Tsimikas missed from four yards, Salah saw a header cleared off the line and Diaz fizzed an effort narrowly over.

Klopp’s side had racked up 15 shots by the interval but their inaccuracy and saves from Gunn – whose father Bryan kept a clean sheet in Norwich’s last win at Anfield – gave them a platform from which they could threaten a shock.

Rashica’s deflected effort from 25 yards left Alisson helpless and briefly gave Norwich hope of back-to-back away wins in the Premier League for the first time in 10 years.

But Klopp moved to bring on midfielder Thiago and striker Divock Origi in place of two midfielders in Naby Keita and Alex Oxlade-Chamberlain.

“It’s a coaching team effort in that we bring the boys on but change the system as well,” Klopp said. “It’s absolutely necessary in a moment like this you throw all the knowledge you have together.

“The 4-4-2 gave them a proper challenge to deal with. All of a sudden we had better positions and were a proper threat. Our reaction was just brilliant.”

The extra attacking body seemed to briefly throw Norwich out of their stride and a fine switch of play from the impressive Jordan Henderson allowed Tsimikas to tee up the unmarked Mane, who swept home.

Henderson completed 97% of his 123 passes – including a sublime through ball for Diaz’s late strike – but again Salah made a crucial contribution, pulling down Alisson’s kick, beating Gunn and finishing past two Norwich players on the goalline.

The Egyptian had eight shots and created six chances – both game highs. Only Roger Hunt – in 226 matches – has reached 150 Liverpool goals in fewer games than the 233 Salah has needed.

Diaz’s late finish will only add to the feel-good factor as the Reds continue to chase four trophies, while their ability to hold their nerve with so little margin for error in their pursuit of leaders City underlines the qualities Klopp’s side possess.