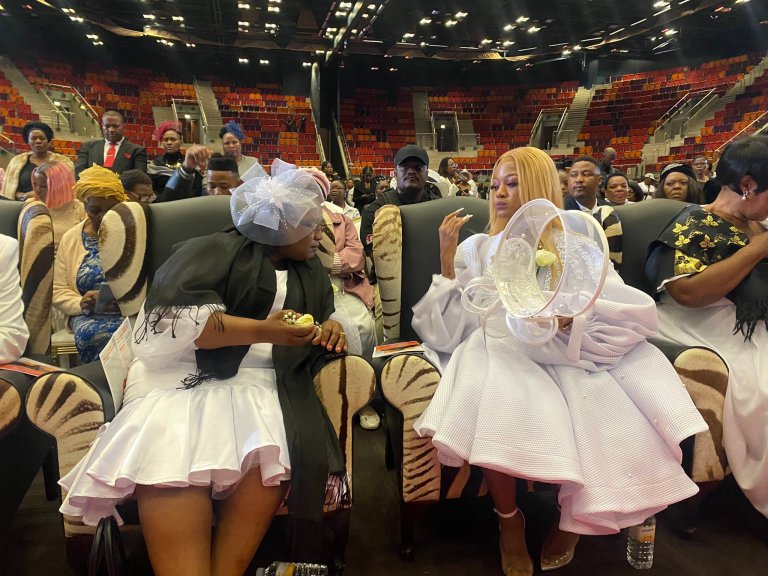 The star’s funeral was held at the Durban International Conventional Centre on 30 Friday 30 December. Family members and close friends of the Kwaito star came to mourn and send the singer off for the final time. The 40-year-old music producer and Big Nuz group member died on 24 December last weekend.

Leading to his death, he suffered a minor stroke and was taken to King Edward Hospital for treatment. The hospital transferred him to Durdoc Hospital where he succumbed to a second and final stroke.
Babes Wodumo paid tribute to her husband by reminiscing on their rather tricky relationship. All the attendees sat quietly listening to the widow speak of Mampintsha.

She said that she thought she would be able to speak in front of the guests but was suddenly finding the task to be more difficult than she had imagined. She thanked everyone for attending and said she felt the warmth and love in the room.

She thanked DJ Tira for caring for Mampinthsa and extended her appreciation to Mampintsha’s father for bringing up her late husband.“In his last days he told me he loves me, and that’s why I think I can be this strong today, she said.

She told the crowd that she never believed that Mampintsha had passed when the nurses told her. She remembered pushing him to see if he would respond but he didn’t.The Wololo singer joked and said she could not believe Mampintsha pass on without giving her the pin to his phone.

The silence in the hall was broken by the laughter that followed. There isn’t any man that does not cheat, there isn’t,” the singer insisted.She then thanked the government for its contribution in pledging to cover 50 percent towards the entire funeral. Babes Wodumo wished to continue working with West Inc Records and said so in her speech.