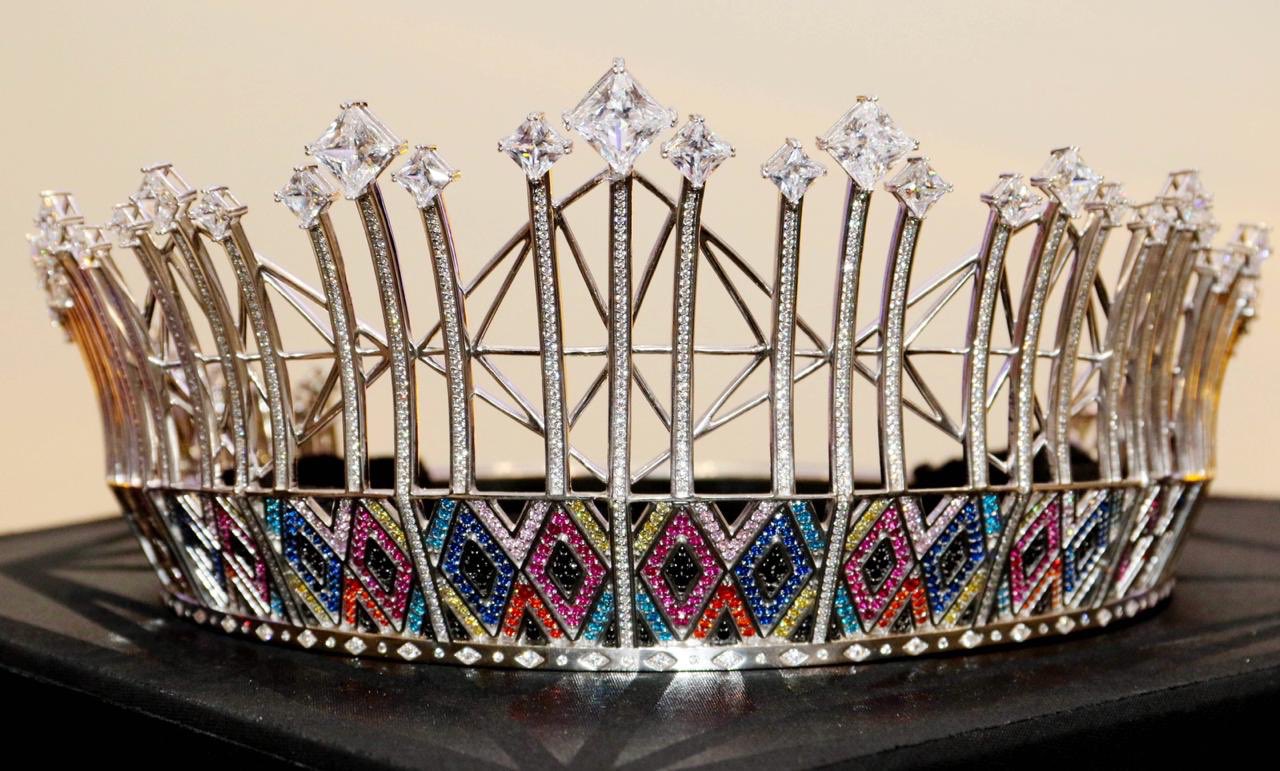 The first look at the new Miss South Africa crown. It weighs more than half a kilogram and is studded with 2 586 sparkling zirconia stones.

Created through cutting-edge technology, the crown took about 192 hours to manufacture. But best of all is the Ndebele pattern at its core – a dazzling nod to the theme of this year’s Miss South Africa pageant: celebrating the beauty and diversity of African women.

The brand-new Miss South Africa crown has been named Ubuhle Bethungo Lenkosazana, which means “beauty of the rainbow” in isiZulu and will be worn by this year’s winner. Buhle was created by American Swiss in collaboration with world-renowned jewellery designer Johan Louw of Uwe Koetter jewellers.

The Ndebele pattern on the crown was chosen because it’s almost universally recognised as being South African,” says Zimbini Peffer, head of marketing at American Swiss. “This crown first and foremost celebrates the importance of women in society as well as their contribution to the nation. The name was chosen to celebrate the cultural diversity in the pageant and the country.

“The colours are beautiful and vibrant in their own right, just like all the women who are participating in this year’s contest.” The vision and idea behind the crown were decided in a matter of hours, but the actual design and manufacturing took plenty of time. The process began by using computer-aided design (CAD) to visualise the crown and then to produce a template.

“It included designing the crown on a computer program and creating an on scale production-ready item that can be 3D-printed, moulded and manufactured. The CAD designing of jewellery is complex, with each detail carefully translated from the original design and created digitally,” Johan says.

Moving upward from the colourful foundation provided by tåhe Ndebele pattern are pavé cubic zirconia topped by larger prong-mounted cubic zirconia heads. These are reminiscent of shooting stars, Zimbini explains – because a shooting star is what Miss South Africa will be. Since the crown needed so many stones, sorting of the zirconia took about 36 hours to complete and the setting process took another 64 hours. It was quite a job, Johan says, but it was 100% worth it.

Being chosen as the winner of the South African pageant isn’t only an honour but a responsibility as Miss SA will be an ambassador for our country. “I, therefore, wanted to create something that’s instantly recognisable as South African.”

The crown, which weighs 517g, will be placed on the head of the winner on the big night by outgoing Miss SA Tamaryn Green, and then only make an appearance at special events. In between, Buhle will be locked away for safekeeping.

The previous Miss SA crown, Enhle, was first worn by Ntandoyenkosi Kunene-Mthethwa, Miss South Africa 2016, and used for the following two years. This year, with the change in the direction of the pageant being inclusive of a diverse range of contestants, it was only apt to change the crown too.

In the celebration of Women’s Day today, Mzansi actress, Nomzamo Mbatha, shared a strong message for her daughter and nieces on social media.

Although Nomzamo has been spending more time abroad in LA than back home this year, she still cares very much about the women in her lives. The time away from home has really given the actress the opportunity to reflect on many important things in life. continue reading…