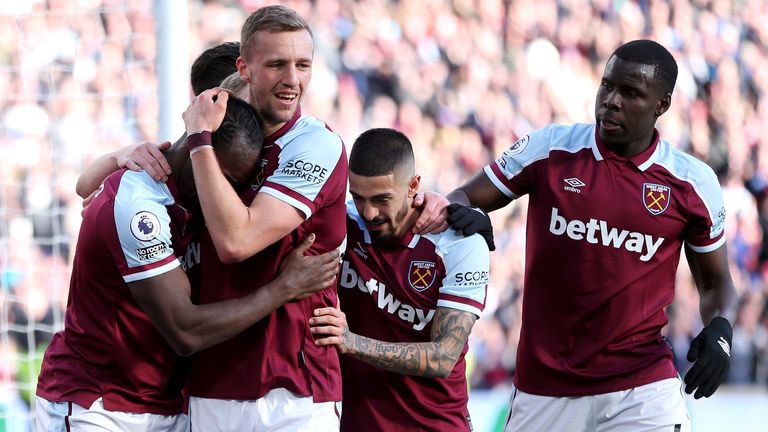 West Ham claimed a valuable Premier League victory over Wolves to reignite their pursuit of a top-four finish.

Tomas Soucek celebrated his 27th birthday by scoring the only goal of the game for the Hammers, with the Czech Republic international poking home from Michail Antonio’s pass.

The result moves West Ham up to fifth in the table, above Arsenal on goal difference and two points behind Manchester United in fourth – however, the Gunners have three games in hand on both.

Consecutive draws had seen David Moyes’ side lose ground near the top of the table but they created several excellent chances to score and deserved their win over opponents who also have European aspirations.

Aaron Cresswell and Declan Rice both went close to opening the scoring for the hosts, with England midfielder Rice curling a superb 20-yard effort against the right-hand post.

Jarrod Bowen, Soucek and Pablo Fornals all had opportunities to double their advantage and ensure a more comfortable conclusion for the hosts who were forced to withstand some late pressure from Wolves, who stay eighth.

Bruno Lage’s team struggled for fluency after he made five changes to the side that started Thursday’s defeat at Arsenal.

And while they improved after the break, the second-half introductions of Raul Jimenez, Daniel Podence and Pedro Neto were unable to make a difference to the outcome.

Before kick-off, West Ham captain Rice held up a shirt with team-mate Andriy Yarmolenko’s name and number on the back as the sides lined up to express their support for the Ukrainian and his homeland which is still under attack by Russia.

Prior to kick-off, Lage said his changes were designed to provide Wolves with greater energy.

However, after the opening 15 minutes, there was no noticeable evidence his decision was influencing proceedings as West Ham grew into the game.

Rice and Soucek took control of the midfield and the likes of Craig Dawson and Kurt Zouma enjoyed a relatively comfortable afternoon against Fabio Silva and Hwang Hee-chan.

The South Korea international was also guilty of missing the Wolves’ best opportunity, placing the ball wide from 12 yards just before the break.

Had he found the bottom corner it may have altered the complexion of the match, and ensured Wolves came away with at least a point despite having only one shot on target.

After a slight stutter of late, this was more like it for West Ham and their manager Moyes, who punched the air with delight at the final whistle.

While Antonio’s goalless run extended to eight games, Jamaica’s forward was a handful throughout.

He made a vital contribution in teeing up Soucek and may have had a goal of his own had he elected to shoot instead of picking out a teammate after escaping down the left.

Meanwhile, Rice and Soucek, working in tandem at the base of the Hammers’ midfield, epitomised everything that was good about their performance.

The duo covered more ground than any other players on the pitch, never shirked their defensive duties and on another day both might have been rewarded with goals from several excellent forays upfield.