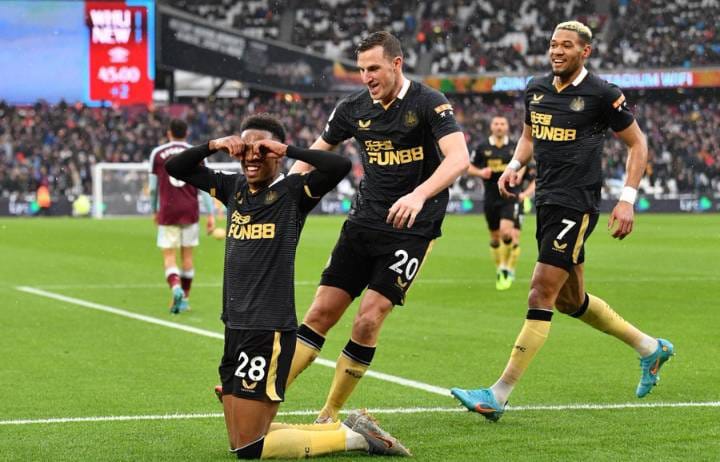 Newcastle continued their impressive resurgence under Eddie Howe with a valuable draw at West Ham that edged them five points clear of the Premier League relegation zone.

Howe’s side are unbeaten in the league since Christmas, despite this result bringing their recent three-game winning run to an end.

But the visitors capitalised on a defensive lapse on the brink of half-time when Joe Willock guided a deft finish onto the far post and watched it creep narrowly over the line.

Newcastle remains 17th but are now five points clear of Norwich, while West Ham missed the chance to return to a Champions League place and stay fifth.

Howe only picked up one win in his first eight games as Newcastle boss but has collected three from five league games since the turn of the year to move the club clear of the drop zone.

This draw came despite the loss of Kieran Trippier, who has had an immediate impact at St James’ Park since his arrival, and electric winger Allan Saint-Maximin – arguably Howe’s two most important players.

But the Magpies boss found Willock and Joelinton in impressive form, with the latter almost sneaking in at the back post early on during a spell of nervy West Ham defending.

Despite their bright start, Newcastle looked set to enter the break a goal down, only for the usually assured Declan Rice to miscue a header into Willock’s path. The 22-year-old midfielder was alert and scored his first goal of the season from a tight angle as Hammers goalkeeper Lukasz Fabianski failed to scramble his shot off the line.

The former Arsenal midfielder also zipped an effort wide from distance in the pouring rain in a second half that saw both sides struggle to assert themselves, and Newcastle will no doubt be the more satisfied with a point.

David Moyes opted to bring Kurt Zouma back in after the defender dropped out during the warm-up at Leicester last week with illness, and with his inclusion still a talking point following the furore over the video of him kicking a cat.

His early touches were booed by the visiting fans, but that was countered by a song in support from the home faithful at London Stadium, and the centre-back did not seem fazed during a physical battle with Newcastle forward Chris Wood.

Another worry for Moyes is the Hammers’ stuttering form, and he must have hoped their late equaliser at Leicester would give his side renewed belief and momentum.

It was the man who rescued them at a point in stoppage time at the King Power Stadium who put them ahead here after 32 minutes.

Newcastle started confidently, but when Emil Krafth fouled Michail Antonio in a dangerous position, Moyes’ eyes must have lit up. His side is renowned for their threat from set-pieces, with only Liverpool and Manchester City scoring more than their 11 goals from such situations this season.

Cresswell duly delivered a superb free-kick and the diving Dawson got ahead of the Newcastle defensive line to head into the corner beyond Dubravka.

Willock’s leveller sparked a reaction from the home side after the interval, but they were unable to create any meaningful chances and are one point behind fourth-placed Manchester United, having played a game more and with several sides below them having a number of games in hand.